Master Concepts In Chemistry
You are here: Home / Solution / How does NaCl dissolve / How does sodium chloride (NaCl) dissolve in water? 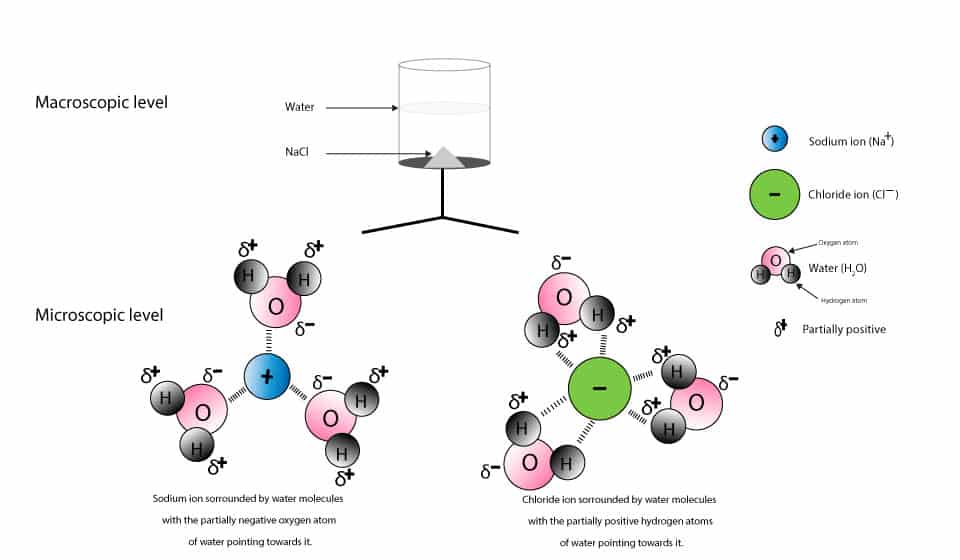 How does sodium chloride (NaCl) dissolve in water?

To understand this process at the molecular level, we must apply the three steps we previously discussed.

The sodium (Na+) and chloride (Cl–) ions must break the force of attraction between them.

How do the ions break the force of attraction between them?

These ions must absorb energy to increase their motion so that they can move away from each other.

How do the water molecules break the force of attraction between them?

The water molecules must absorb energy to increase their motion so that they can move away from each other.

The water molecules must strongly attract the sodium (Na+) and chloride (Cl–) ions. This strong attraction is necessary to generate enough energy to supply the 1st and 2nd steps.

Water is able to attract these ions because of its polarity. That’s one end (oxygen atom) of the water molecule carries a partial negative charge, while the other end (hydrogen atom) carries a partial positive charge. Because of this polarity, water molecules will arrange themselves such that the negatively charged oxygen atom will attract the positively charged sodium (Na+) ion, and the positively charged hydrogen atom will attract the negatively charged chloride (Cl–) ion. This attractive force is usually called  an ion-dipole force. At the end, when all the NaCl dissolves, the sodium (Na+) and chloride (Cl–) ions will each be surrounded by water molecules and will appear at microscopic level as:

And at the macroscopic and microscopic levels, it will appear like this:

This surrounding of sodium and chloride ions by water molecules is called hydration. Therefore, when we write Na+(aq)  or  Cl–(aq) the symbol (aq, aqueous) usually means that each ion is attracted to and surrounded by several water molecules. Thus, the ions are solvated (hydrated).

To learn more about the crystal structure of NaCl, click here.

To learn how to prepare chemical solutions, click here.